Home › MSP Tips › MSPs: Use These Three Tips to Let LinkedIn Help You Market Your Business

MSPs: Use These Three Tips to Let LinkedIn Help You Market Your Business

Some time ago, a friend shared an interesting set of data with me.

He showed me the statistical breakout of social media “shares” for some of the top Managed IT firms in the industry.

The results really surprised me.

Broken out into a series of bar graphs and charts, the survey showed the number of articles and other content items published by these firms that readers had shared but, more importantly, it showed which social media platforms had been used in their dissemination.

I’m not sure why, maybe it was just my personal habits coloring my perceptions again, but I assumed that the majority of the activity would have occurred on the more high-profile sites, you know, Facebook and Twitter. But that wasn’t the case at all. By a huge margin, by far the most frequently used social media outlet was LinkedIn.

Initially, that surprised me. Perhaps that stems from my casual approach to social media, or it might have something to do with the fact that I’ve had so many conversations with younger people who insist that ‘nobody really uses LinkedIn anymore, that’s just how older people, people in their forties, or fifties (gasp! does that mean that I’m no longer culturally relevant?!) network’.

With these conflicting impressions, I decided to dig a little deeper. What I found was, again, surprising.

LinkedIn currently has over 360 million members. The median income of its members tops out at over $100,000. For a lot of professionals, LinkedIn is how business gets done and, increasingly, businesses use the platform as a low-budget means of marketing themselves. In an already crowded and noisy marketplace, we’re increasingly fine-tuned to pitches and very leery of constantly being sold. Nobody likes feeling like they’re being spammed, and social media outlets are increasingly vigilant about users abusing their privileges in an effort to take advantage of a captive audience.

In addition to that, most of the guides that you’ll find suggest practices that just aren’t feasible to MSP,s. I can’t imagine that there are many of us who feel like we have the time to update our status two to three times a day – most of us are too busy managing our accounts and taking care of, oh, I don’t know… business? to do something that feels so labor intensive and a little… squishy.

Getting your name out there is important, too.

If you’re already on LinkedIn, it’s a given that you’ve devoted a sufficient amount of time and effort to the creation of a well-crafted profile with links to your company website, etc. That’s a great way to create a professional network, but there is more that needs to be done beyond that in order to create a useful LinkedIn marketing presence.

Bearing in mind that time matters, here are three simple steps (that aren’t spammy) that you can take, using LinkedIn, to enhance your business and raise your professional profile:

• Create a content stream that demonstrates value. Present yourself as the expert that you are by sharing material that indicates that you are a thought leader in the industry. But be sure not to fall into the trap, though, of talking only about yourself. No more than twenty-five percent of the material that you post on your platform should be specifically about your company. More than that and you’ll hurt your credibility as an industry leader.

• Post. A lot. The old Woody Allen gag about relationships being like sharks, they need to keep moving, or they die, also applies to your social media activity. Whatever you do, even if it is simply sharing an interesting link, make certain that you’re active at least twenty times per month.

• Interact with your followers. The idea here is to make as many impressions as possible. When somebody responds to you, get right back to them, when putting out material, solicit feedback – invite readers to share, encourage them to ‘like’ posts. The more contact points that you can create, the larger the pool of prospective clients.

The bottom line here is to establish yourself as a valuable resource. The more you’re able to credibly add to a conversation, the more frequently your thoughts and solutions will be accessed.

Those access points broaden your network, and that broadens your reach. 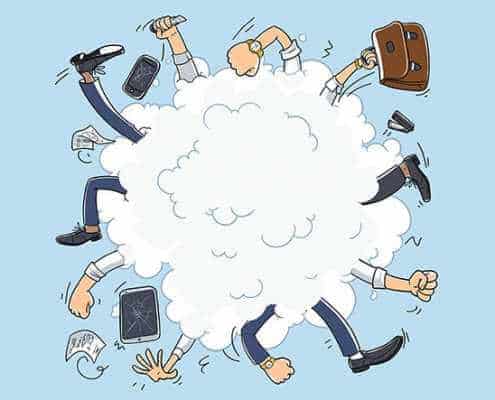 What Could Joining a Peer Group do For Your MSP Business Growth?

The Power of an Involved Community in SaaS Product Development