Home » Technology » NTFS vs FAT: What do I Need to Know as an IT service provider?

NTFS vs FAT: What do I Need to Know as an IT service provider?

NTFS, also known as the New Technology File System and NT file system, uses the Windows NT operating system to store and retrieve files onlook and hard drives. It was first introduced in 1993 in newer versions of Windows OS.

Where else is NTFS used?

Generally, a computer OS creates and maintains the file system on a device or storage drive. The file system organizes the data into files. It decides how data files are stored, named, updated, and retrieved. The OS differentiates between the file system and the type of drive they are used with. There’s also a distributed file system (DFS) where files are stored across multiple servers and are handled and accessed, stored locally. DFS allows different users to share files and data on a network and provides essential redundancy.

How is NTFS used?

When an HDD or SSD is initialized or formatted, it is divided into partitions. Partitions are the main divisions of the hard drive’s physical space. Within each partition, the OS tracks the record of all the files it stores. The files are stored on the HDD in one or more disk spaces or clusters of a uniform size. The cluster size is determined by NTFS, which can range from 512 bytes to 64 KB.

What are the Main Features of NTFS?

As the primary file system that Microsoft uses for both Windows and Windows Server, some of NTFS’s top features include:

NTFS vs. FAT: What’s the Difference? 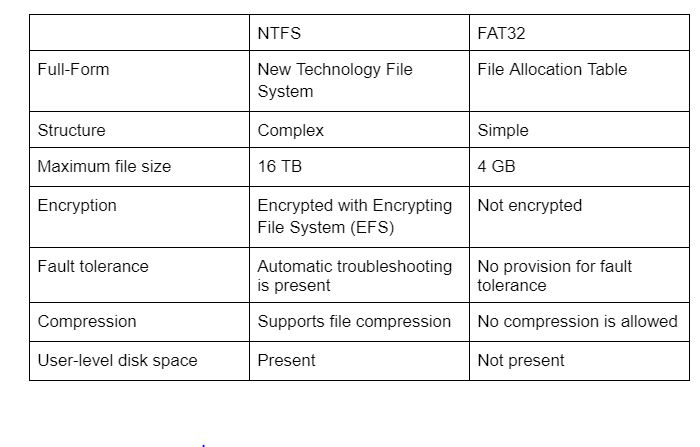 Fault Tolerance: NTFS always updates its log files. In case of power failure or any other error, it repairs the folders and files automatically without notifying the user about the damage. FAT maintains two different copies of the file allocation table and uses a backup mechanism if any error occurs.

Security: NTFS allows you to set security permissions on both local files and folders. In FAT, the shared functions act as a security feature, which means the shared files are vulnerable locally, but secure in the network.

Compression: You can compress files and folders individually in NTFS without worrying about slowing down the system depending on the partition compression.

Conversion: You can convert FAT to NTFS, but the reverse is not true, as NTFS follows a secure protocol. If you want to convert NTFS to FAT, you’ll have to back up your data and format your disk appropriately.

Why choose NTFS over FAT?

As well as the points mentioned above, NTFS can also be resized and improves space utilization. Microsoft has built-in features for extending or shrinking partitions, which NTFS can only use when it comes to resizing. Windows doesn’t have any feature related to resizing for partitions in FAT. You will have to use the professional partition manager – MiniTool Partition Wizard for FAT.

A cluster can only put one file in space utilization, but a file can take more than one cluster. If the cluster is small, the partition can save more space. NTFS supports more sizes of clusters than FAT. NTFS’s cluster can be smaller, making more efficient use of the partition.

Looks like NTFS has won, unless you’re looking to format volumes where there are more than one OS on the same machine. If you have only Windows OS – NTFS is usually the right choice.

Ready to whip your IT software stack into shape?