Real-time monitoring is the most essential function of remote monitoring and management systems (RMM). In RMM implementations all of the monitoring activities are carried out remotely, with the administrator viewing data about the performance of the monitored system through a browser.

The software that processes collected performance data can be installed on a server on the premises of the monitoring organization or on a cloud server, where the RMM can be delivered as a service. One of the main characteristics of RMM monitoring is that the site being monitored hosts very little of the monitoring software.

Remote monitoring is a service offered by managed services providers (MSPs). It is in the interests of both the MSP and its client to prevent failure rather than to react to it. The client doesn’t want to lose productive use of the IT system because of an overloaded or broken piece of equipment. The MSP can serve its client at lower cost by spotting problems that lead to failure and correcting them than by waiting for something to break.

Constant monitoring is a more efficient solution for support services than the break/fix model. By preventing failure, the MSP can ensure that the users of the client system get uninterrupted service from their IT system.

The monitoring modules of RMM system include automation. This enables monitoring to be carried out unattended. The MSP saves money and so can offer a cheaper service to its clients by reducing the number of staff needed to administer a client system. Automated monitoring also means that the client’s system can be watched out of office hours.

The remote monitoring services that are supported by RMM systems extend to network, server, and application performance.

Keeping the network running is a key requirement for any business. If the network goes down, all communications in the business fail. In these days when virtualization, digital telephony, the use of cloud services, and the constant need for email access are common, the suspension of network services could ruin a company.

Monitoring network health involves examining the statuses of the devices that link network cable together — switches and routers. All network devices available for purchase today already have device status reporting software loaded onto them.
This software is called an ‘SNMP agent.’ SNMP is the Simple Network Monitoring Protocol. This system enables a central controller to request status reports from agents that are resident on each device connected to the network.

The protocol is not a computer program, but an outline of procedures and formats. By complying with the recommendations of the protocol, anyone can write a program that will be able to interact with other software written according to the SNMP rules.

The device agent constantly checks on the statuses of the device on which it is resident. It waits for a request message from an SNMP manager and then it replies with the current data of the status report. If there is no SNMP manager active on the network, the request for statuses never comes and so the agent never sends out its report.

Real-time monitoring software fulfils the role of SNMP manager. In RMM, that monitor is resident on a remote computer and it sends its status requests over the internet. The RMM software has its own agent running on the client’s server and this gathers all of the SNMP reports and forwards them on to the monitoring software.

RMM systems are able to monitor servers without being resident on that host. However, in order to get full access to all statuses, the client will need to install an agent on the server. That agent acts like an SNMP device agent and it gathers status reports on the server for reporting.

It is possible to monitor servers without an agent. However, the agentless monitoring method is only able to report on external characteristics of a server, such as response time and the statuses of ports. Agent-based monitors can report on CPU, memory, and disk statuses.

All of the process information that users are able to see in the Windows Task Manager can be communicated to a remote monitor. However, this information is only available via a server-resident agent.

Some IT managers are reluctant to allow MSPs to install agent software on their equipment. However the remote monitoring model is unable to function properly without that agent. The agent is able to send out data, establishing an outbound connection from the server. That keeps standard security measures in place because it doesn’t breach a sound security policy of blocking all incoming connection requests.

Monitors can identify the source of network traffic by examining the protocol identifiers embedded in the headers of the packets that carry that data. Protocol identification enables network monitors to feed through to full network management functions, such as traffic shaping and application prioritization.

Identifying the underlying causes of problems

RMM real-time monitors are especially effective at resolving performance issues if they are able to monitor the full stack. A slow piece of software, such as an email client, could be caused by a problem with inefficient code, a conflict with orphaned processes, a hanging service, an overloaded server, or a crowded and under-provisioned network.

The ability to drill down and identify the root cause of a performance issue, enables technicians to take action to head off problems.

Analytical functions in RMM tools also add to the full service that an RMM can offer to its clients. With both real-time monitoring and the analysis of historical performance data, an MSP can produce recommendations to help the client to reorganize its hardware or buy-in extra equipment to work around bottlenecks and provide a faultless IT service to all of the client company’s users. 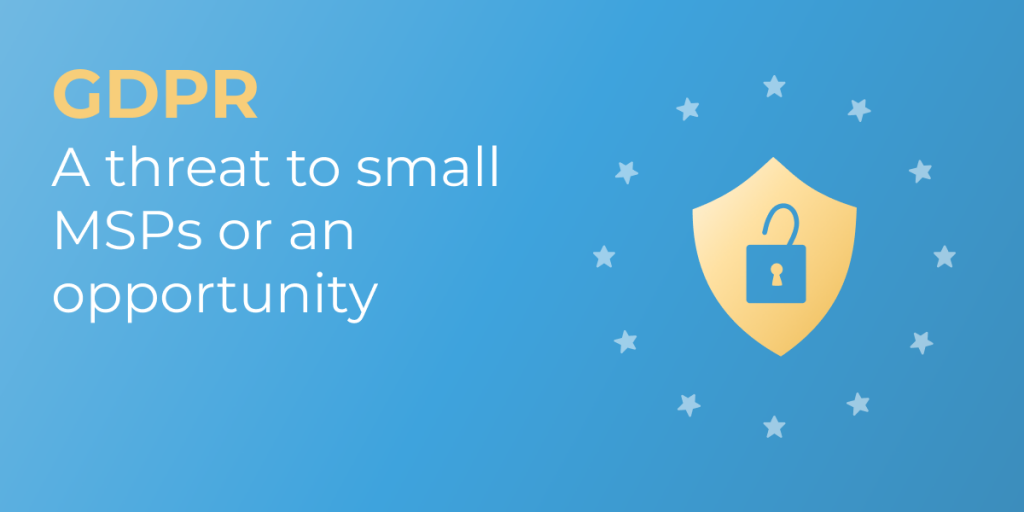 GDPR: A Threat to Small MSPs or an Opportunity?

Highlights from our End of the Year Fireside Chat Webinar